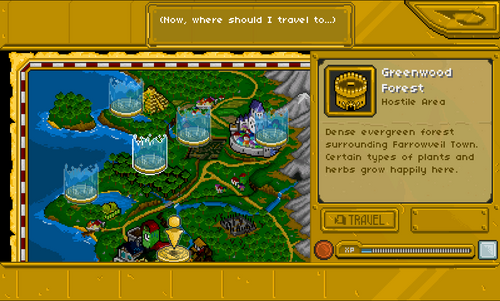 Version 1.2.5 is now available on the Play Store, and it includes some new additions to the game.

One of the complaints for Alchemica is that some players felt that the amount of materials gathered from exploring a dungeon was lacking . The last update introduced Fighters Guild Inquiry, enabling Charlotte to obtain extra materials meanwhile she is free to do something else. While this helps easing the problem, she is limited to post such request once per day.  To help players obtain more materials, we introduced a new mechanic to the game: Dungeon Experience.

Similar to the crafting mini-game, Charlotte is now able to gain a badge for each dungeons she explores in the world of Rochendil:

Just like Fighters Guild Inquiry, Charlotte must complete the dungeon first before she can start working to gain experience for it. Experience is gained every time she passes the the last floor of a dungeon into another area. Dungeon experience will not be available for special dungeons like Gloomlight Cemetery and Land of Plenty, since those dungeons work differently,

We also made changes with the way recipes are obtained. Starting with this version, ALL recipes should no longer locked behind quests. Players who utilizes wiki are free to unlock any recipes through the crafting mini-game.  To balance this, we also reworked quests rewards to make it worthwhile for players who spend the effort to obtain recipes through quests.

The biggest change from this update is that Merchants Guild inquiries that in the previous versions solely reward a recipe will also give about a dozen of free samples of the item (on 100% quality) once it is completed. This is meant to give more incentive to complete said quests as they are only available for recipes that are yet to be unlocked in the game. Note that this only applies to inquiries generated AFTER the update, so the request board need to be refreshed before the new change will take effect.

Another new feature is the ability to start a new game with the introduction storyline and tutorials skipped. The game will start at the point where Charlotte is given the Chrnotrome by Vael'zorra, at the front of her store. We realize that the first leg of the story is quite long and some players dislike repeating it over and over again, or even experiencing it altogether (Which make us sad because we spent a lot of effort to make an appealing story for the game :'( ). This feature is also a prelude for a new feature which hopefully will be introduced next week. Can you guess what it is? ;-)

On top of all of those new features, we also made numerous bug fixes and enhancements to the game. As always, feel free to contact us if you run into a bug or a new suggestion for the game. Happy adventuring!